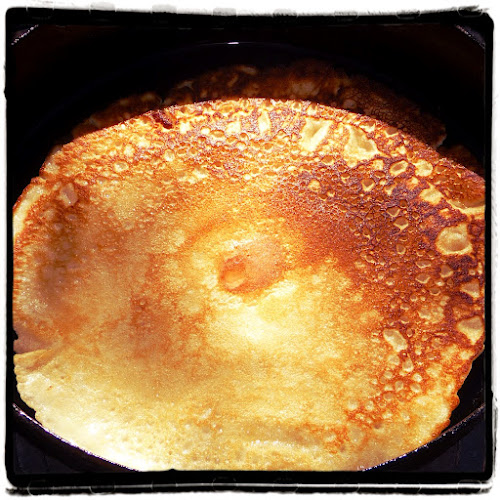 The perfect golden brown muurinpohjalettu (Finnish crepe)
Given the cryptic title of this post, I guess I have some explaining to do. Some things just don't translate easily, and if Wikipedia doesn't have an English entry, I'm left all alone trying to make up the most ridiculous translations. There are things which are very typical Finnish and have some sort of an English equivalent, but it's just not the right translation. Take the Finnish muurikkalettu. It's a thin crepe, cooked on a skillet and very different from it's American much fatter cousin the pancake. You can get something very similar in many places, including France and Switzerland where it's often flambéd in some sweet liqueur, or in Sweden where it is served with whipped cream and strawberry jam. And in Finland, we have the basic type of crepe as well, it's usually made from a simple batter with just milk, egg, wheat flour and possibly sugar. But then we have another crepe as well, the muurikkalettu or muurinpohjalettu. It is cooked on a huge cast iron pan, sometimes up to a meter or more in diameter. The name of the pan, muurinpohjapannu, comes from muurikkapata which is a huge cast iron cauldron which was used to boil bed sheets (and other laundry) back in the old days. Anyways, the crepe pan resembles the bottom of these big cauldrons and has hence been named muurinpohjapannu, i.e. bottom-of-the-cauldron pan and in some Finnish dialects shortened to muurikkapannu.The most hard-core crepe makers can even use it over an open fire, but these days it is usually used over a gas flame which gives you more control over the temperature of the pan. Think along the lines of a paella pan; big, black and flat.

The muurikka-crepes differ a bit from regular crepes. Usually part of the wheat flour is replaced with barley flour to make the crepes a bit more crispy and give the crepes more flavour. Every crepe maker has probably developed their own take on the batter, depending on their pan and style of making crepes. My mum is the official crepe-master at our summer house, and although we have one of the proper big pans, she prefers to make the crepes in our age old cast-iron pans. This way the crepes don't get quite as big, making them easier to handle (and particularly to flip) and you can fit two or even three pans on the big outdoor wood burning stove. This is of utmost importance as the crepes are usually consumed much quicker than they can be made. And of course, the pancakes taste the best straight out of the pan. I tried to ask my mum for a recipe for the batter, but of course she doesn't use one. She just does it on feel. However the recipes that I have found online all seem to be very similar, so I'm stealing this one from Pirkka which would be the Finnish equivalent of Tesco real food. Usually the recipes there are well tested and use basic ingredients and don't try to be overly fancy and my Mum was guessing this was pretty close to her crepe batter.

Finnish muurikka-crepes (makes about 6-12 depending on the size of your pan): 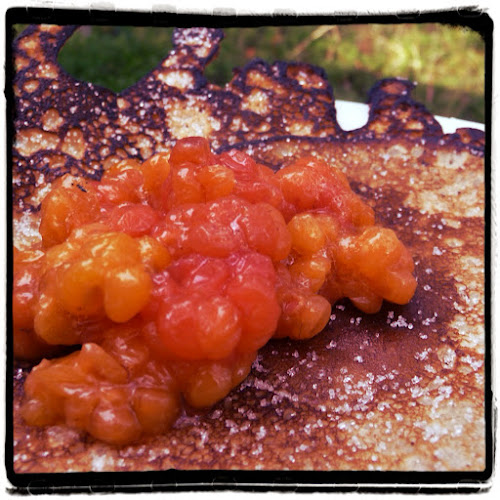 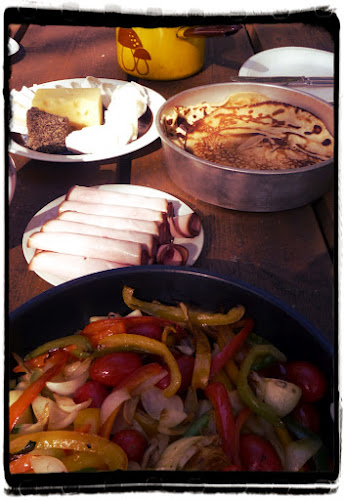 
Mix all the ingredients, and let stand for at least an hour, and up to several hours. When cooking the crepes, heat a muurikka-pan or cast-iron pan and add rapeseed oil or a mix of butter or rapeseed oil to the pan. Add batter to the pan, and swirl around to spread the batter to make a very thin crepe. When the batter is no longer runny and the underside is cooked golden, flip using a large spatula and cook on other side as well until golden brown. Serve with sweet or savoury fillings. 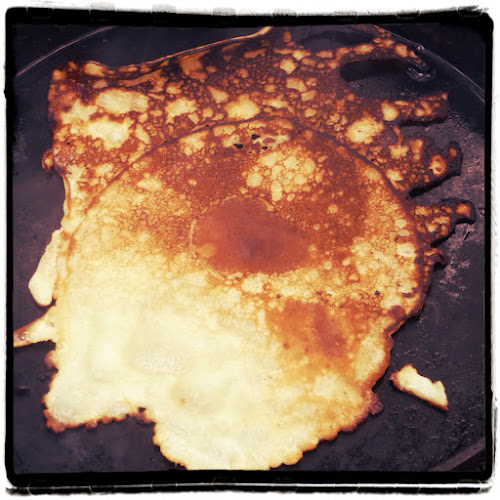 Don't worry if all crepes won't turn out perfectly

symmetric, they will still be delicious

These are a summer house staple. There is no way my Mum would ever get away with not serving these crepes at least once or twice when we are staying at the summer house. They taste the best straight out of the pan and my favourite filling is strawberry jam. Although admittedly this summer we were spoiled with ripe cloudberries which were hand picked by my Mum's partner. Cloudberries are one more thing on a long list of things I miss, and which are impossible to get in the UK. To be fair, they are so ridiculously expensive back home as well that I hardly ever ate them anyways. They have a very distinct, almost honey-like flavour and are brightly orange. They are often used to make jam or liqueur, and it's a bit of a luxury to get them freshly picked and not in over-sweet jam but as is with some of their original tangy-ness (yes, of course it is a real word!) still left.

Also, don't think you will get away with serving one or two crepes per person. Well at least motto me. Maybe to a normal person. But I can eat half a dozen. Ok maybe not half a dozen, but at least four. And the left overs are great to nibble on later in the evening either cold or re-heated (the most traditional way is to re heat them in the 'summer house microwave' i.e. on the sauna stove. They get a bit extra crisyp when re-heated and should be torn to small pieces and eaten as is. Well, that's how we do it. They make a great brekkie too. 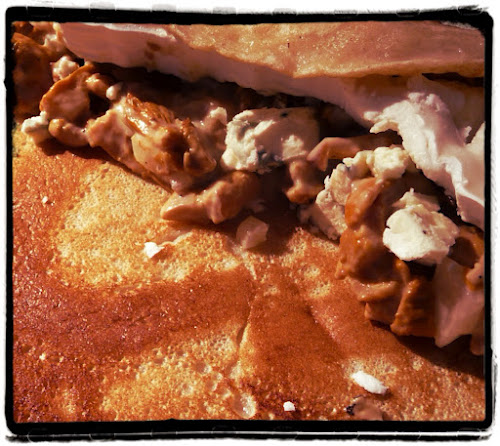 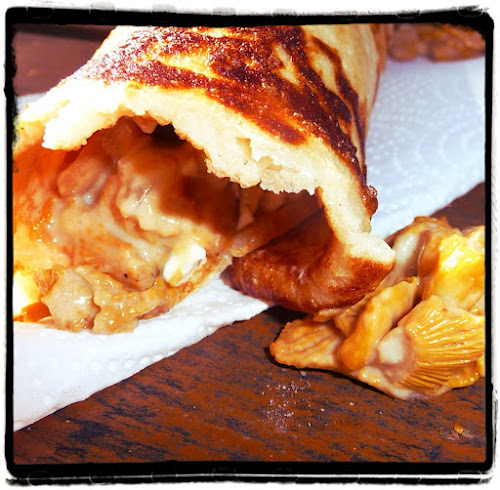 This time we served crepes for dinner one day too. We had a huge selection of fillings, starting from a chantarelle sauce and ham, and loads of grilled veg and five (yes, I kid you not) different cheeses. I love to be able to mix and match. Chantarelle and goats cheese with a sprinkle of blue cheese is delicious. Again, Finnish blue cheese is just divine. I know it's just a question of what you have grown up with and gotten used to, and as much as I love any blue cheese (who wouldn't!) the Finnish Aura will always remain my favourite. It's more salty than other blue cheeses and a bit milder than Stilton or Gorgonzola. It's also more crumbly than creamy. The best combo ever is Aura and gingerbread. But only the very thin, crispy and richly spiced Finnish/Swedish gingerbread. Well, I'm sure it would be quite good on the softer, more ginger-y UK type gingerbread as well, but the traditional Anna's papparkakor (I think you can get them at Ikea!) are the original and best.

Ok, that was it for today's rant of Finnish food which is superior to that anywhere else. You have to forgive me, it's just been over six months since I last was visiting Finland, and there are some things you just start craving so bad. And when you finally get them, it feels like you have never eaten anything so good in your entire life. Of course, I'm now on day six of the big holiday binge, and I've stopped wearing jeans. Because I can't fit into them anymore. I can see months of suffering ahead as soon as I get home. Which is why I need to enjoy all of this while I'm still on holiday. Because calories on a holiday don't count. Well at least not until, you get home ad have to work them off. Funny enough, when I get home, it's pretty much one year since I started boot camp. And although I have some serious damage control in the months to come, at least I don't need to lose 6 stone. Thank god. 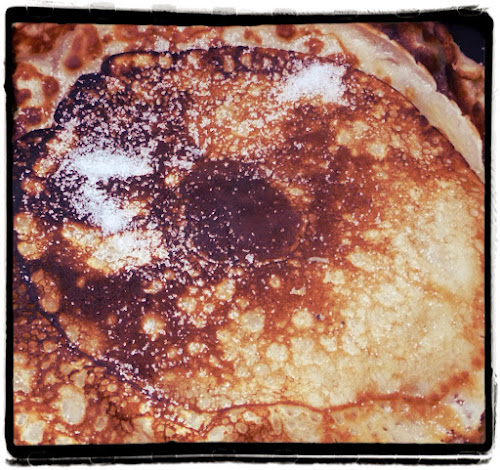 Pink Unicorn
I'm a scientist with an interest in shoes, food, photography, crafting and all pretty pink things. I would love to hear from you so please feel free to leave a comment here or on the InvisiblePinkFacebook (www.facebook.com/InvisiblePinkFood)